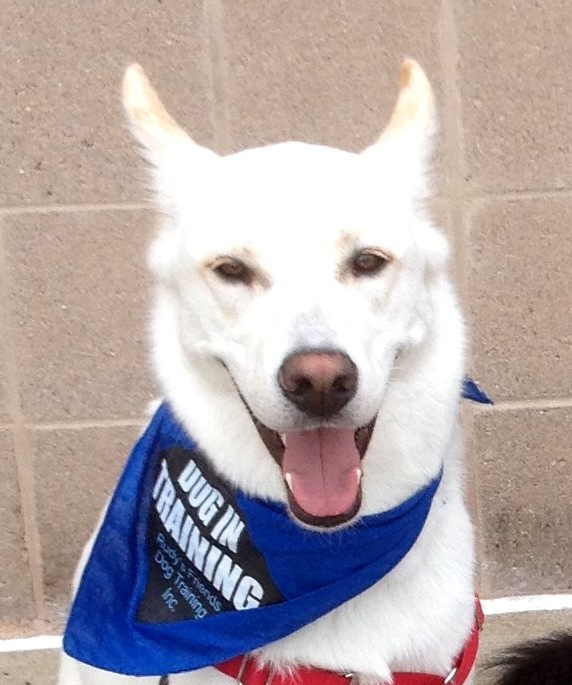 The majority of our service dog work is with Canine Companions for
Independence, http://www.cci.org, however there are times when we work with private individuals. We greatly appreciated the time that Deb took to write her email and wanted to share it with you. Our Missie was also a huge help in working with Honor, white GSD, since service dogs must focus on their owners when in public. Missie was a great distraction for him at shopping centers and in stores.

There is rarely a moment when I take Honor somewhere and someone remarks on how well trained, or well behaved, he is that I don’t think of you.  Which means I think about you a lot!

As you go into 2016 I hope you are able to reflect on what an amazing job you do and on how many people you positively impact.

Honor is a well traveled dog.  From the Kennedy Center to Broadway, in each of the dozen or so states he’s visited, restaurants fancy or simple, stores, offices, meetings…and even airplanes, he makes friends.

We went to see Allegiance on Broadway.  During the intermission, one of the ushers was interacting with him when another asked if she could take his picture.  I said sure (he gets his picture taken by a LOT of strangers).  Then I heard someone else mutter “One asks for permission, others do it.”  I looked up to find people stand in the various rows – at least a dozen – with their camera phones all pointed at him.

Two years ago I wouldn’t have been able to do that show OR the one at the Kennedy Center (Gigi).  That’s how much he – and your help – impacted us.  In November I took a two week “walk about” – no fixed plans (other than that show on Broadway) and we drove about 2600 miles – from Virginia to Vermont to Maine to North Carolina and back.  He visited mountains and saw (and played in) the ocean for the first time.  He loved the Ocean.

Sunday he took his first plane ride.  It didn’t delight him but he was as good as

Attached are pictures I’m sharing with you of our adventures.  I thought you might like to see a bit of your handiwork.

Thanks Deb and we wish you and Honor much health and happiness as you continue to work and play together.